A Glimpse Inside My Brain

February 24, 2014
Surreal...I don't know how to turn “feels surreal” into a noun. My brain is a little sluggish these days. However you describe it, my pregnancy feels very surreal right now. This is not to say I don’t understand there’s a baby coming. It just feels a little bit like a game of just pretend right now. So in light of this...I haven't quite been able to cobble together a pregnancy related post so in the meantime, I give you this...

Someone recently said to me (after reading one of my nonsense facebook updates)..."I wonder sometimes what really goes on inside that brain of yours". Well my lovely friends...here's a glimpse...

I've been thinking about Ewoks. You know Ewoks, right? Those furry little dog-like/bear-like creatures from Return of the Jedi that lived on the forest moon of Endor?

So anyway, I love them and I was just sort of daydreaming about Star Wars and how awesome it would be to have an Ewok.

Think about it....seriously think about how much more awesome your life would be if there was just an Ewok with you right now.

So anyway I made a list of why I think that Ewoks would be the best pet-friend ever.


What about you...do you love Ewoks too? 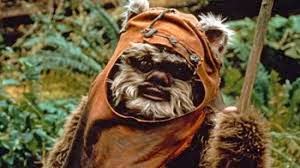