A Day Devoted to Hugs

January 21, 2018
Today is National Hugging Day. I know this because I saw it listed on a friends little ones school calendar next to a graphic of Winnie the Poo hugging Piglet. So it’s totally legit.

Coincidentally, I recently read an article that indicated people need four hugs a day for survival, eight hugs a day for maintenance, and twelve hugs a day for growth. Loch is my official hugging partner, but he’s at the age where he sometimes says, “I already hugged you,” if I ask for too many. Even Adam and the cats are like, “Really??” So basically, I’m barely surviving.

In thinking about all of this, I could not help but wonder how many hugs the average person gives and or receives in an average day. I tried asking the general question to a few friends, but the results were inconclusive. One friend enjoys a significant amount of hugs, one asked if his dog counted...um, yes, and another said he didn’t get enough hugs...though he does love them. So clearly, and shockingly...this wasn’t the most scientific approach. And I’m still left wondering.

There are plenty of articles out there about the benefits of hugging, much like the one I recently read. So yeah, hugs feel good and they are good and they make your life infinitely better. But why don’t we hug one another enough? Is it the touching? The intimacy? The worry that we’ll be rejected? The fact that we take each other for granted too often and thus end up skipping the hug?

So, I guess it’s been on my mind and I haven't noticed, and today, on the huggingest of all holidays, I’m reminded that I just don’t get or give enough hugs in the course of my day. If I had to self-diagnose, I’d say my biggest impediment is that I’m an anxiety-filled lover of people, simultaneously craving human interaction while also being terrified of it. And since I’m woefully behind the daily recommended dose of hugs, I will have to find away to amend the problem.

At least I know that tonight, after he’s bathed and relaxed for a bit, Lochlan will ask me to snuggle him, We’ll read and then sing “Down by the Bay” which he’s retitled “Watermelon Bay,” and then he’ll hug me until he falls asleep. And then I’ll sit there long after he starts to snore, soaking up the extra-long hug for as long as I can, hoping that the sheer length and depth of it will make up for all the lost connections of the day.

Let me be clear though...while I do need more hugs in my life, there are some hugs that I'm just not interested in receiving.

What about you...do you love/hate hugs and/or feel like you get the required amount? 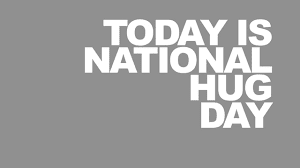