May 08, 2014
21 weeks into this pregnancy and I have to admit...I NEED cheese. I've been thinking of cheese so often, I decided to write a letter to the inventor of cheese and to thank them for making this pregnant lady very happy and full.

Oh my goodness. Oh my word, you invented cheese. You did...you!

One day, you just had all this milk from these cows that you maybe already owned or "borrowed" from a neighbor and the next thing you knew the milk was molding but it sort of looked delicious even though it smelled like farts. Maybe you were on some sort of old timey version of Benadryl for your strange bovine allergy...like some kind of hallucinatory elixir that gave you the munchies real bad, so you thought to yourself, "Why not. I shall eat this stinky, smelly, moldy lump of cow excretion and then I shall call it cheese".

I think about you on a daily basis, I do. Sometimes up to sixteen times a day (but never seventeen). Mostly, I wonder what it is like living in Switzerland in the magical town of Fromage (not a real place) where everything smells like cheese and the cows can talk to the humans (I made that up). I imagine that sometimes they do reenactments of French people smoking cigarettes and/or Celine Dion (she's a fellow Canadian didn't ya know know).

You know, Inventor of Cheese, this one time I went to a town just outside of Amsterdam called Volendam and I got to tour a cheese factory. It smelled so bad but there were lots of free samples so I overlooked the smell and ate the cheese because I will never turn down free food. Also, the cheese was a delight.

Cheese, you are so good and without you I worry that someone else would have invented it and it would have only been Blue Cheese and probably then just the really stinky Blue Cheese. No one really likes Blue Cheese, even if they say they do. My favorite kind of cheese right now is Oka but later it will probably be Cheddar. It’s always goat cheese but rarely Feta. Oh, and why did you invent Cottage Cheese? That stuff is the pits. Not like the pit of an olive or fruit but the pits as in my armpits. As in gross.

But I have to say...I mean I wasn't legally compelled to say this but we've gotten this far in the letter so I might as well, right?...that I am just such a fan of cheese as a snack. It should be its own food group in general and is a booming faction of the dairy industry. It also makes a great occasional topping on a salad and on the token passed around trays at the nine hundred gazillion social events where cheese is served.

Oh, inventor of cheese, who are you? I want to hug you! 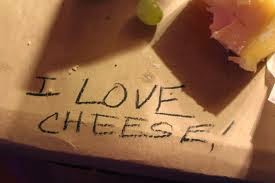