October 11, 2012
Despite my paranoia about foodborne illness, I will tear up some cake batter with wild abandon - an action done without concern or an action done carelessly/flippantly...according to Urban Dictionary. Not that I ever make them a whole lot, really, but when I do, roughly ¾ of said mix ends up in the oven while the rest ends up in my belly, raw eggs and all. It is delicious, although it’s not entirely nutritious. But who cares...Say yes to life!

Some geniuses at a confectionery company have managed to master the whole "possibility of salmonella" predicament while keeping the cake batter goodness intact in candy form. Not to mention the fact that they've upped the ante by covering it in sprinkles. Whaaaat? I know, right.

I discovered these little beauties hiding way up high on a shelf at the store the other day - this should have been my first warning - but no, I'm brave like that and was willing to try. I mean what could go wrong. Surely these were going to be as delightful as I imaged. Right?

I waited until the right moment to sit and enjoy. It was a lovely evening, I was tucked into the corner of the sofa with a cup of tea and a blank covering my feets. The moment was now...

I opened the box and pulled out the bag...

Ugh. The thing is, they were pretty unattractive out of the bag. Small orbs, no bigger than a pea, with ice cream sprinkles haphazardly mashed onto a chalky, greyish coating. According to the box, they have a wheat-based center with a candy coating. And sprinkles. Don't forget the sprinkles.

While I give kudos to the company for explicitly stating that the chief ingredient is "white birthday cake," I can't help but shudder at how unappealing these are to eat. I was thinking how "Frankensteinian" these things were. That being said, I was still holding onto a shred of hope.

I popped a few in my mouth. The truth - I could nosh them with no enjoyment or sentiment, they're absolutely terrible and Frankensteinian. Opening the bag, I was struck with a clinical, powdery scent, like the coating on a pair of medical disposable gloves. That alone was so unappealing that I almost didn't eat these at all. But I did.

The texture of these is really off putting...grainy. The graininess made me feel like I was chewing on a tablespoon of pure granulated sugar mixed with greasy shortening. There's no cake flavor to speak of and the mushy, irregularly textured center is a far cry from the fluffy, fragrant plushness of actual birthday cake. There were quite a few sprinkles in each bite which threw off the ratio of sprinkles to cake and turned them from a garnish to an ingredient. Those of you who have eaten raw sprinkles know that they taste kind of gross, with a crumbly, chalky waxiness and a strangely fruity sweet aftertaste, like that of an artificial sweetener. These were terrible.

Even for a dollar, I was pretty disappointed. 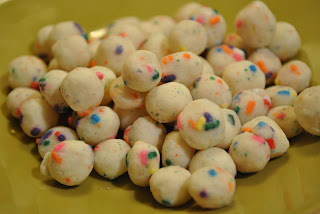 What sweet treats do you love?