I love Spoonerisms, mostly because I misspeak a lot. What's a Spoonerism? A spoonerism is when you confuse the beginning sounds of two nearby words. For example, I keep one drawer in my desk at work full of candy for when I need that pick me up sugar jolt. This morning's snack of choice were some jelly beans and because it's rude not to share, I offered some to my boss. "Mr. Boss, would you like some of my belly jeans"? I asked. See...spoonerism!
In case you were interested...but you probably aren't but I will tell you anyway...The term Spoonerism is named after Reverend Spooner, a man of the cloth who lived in the latter part of the 19th century, no doubt entertaining his parishioners by accidentally swapping syllables. Spooner’s most infamous mix up was when he said, “May I sew you to your sheet?” (rather than the innocuous May I show you to your seat?). One of my other favourite spoonerisms was coined by my rock climbing friend who drunkenly called his favourite bottle of wine... his...wottle of bine.
Words are fun. 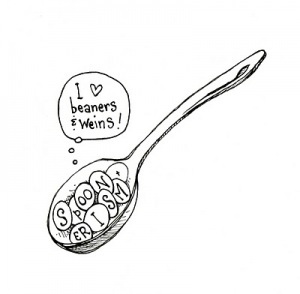